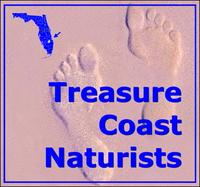 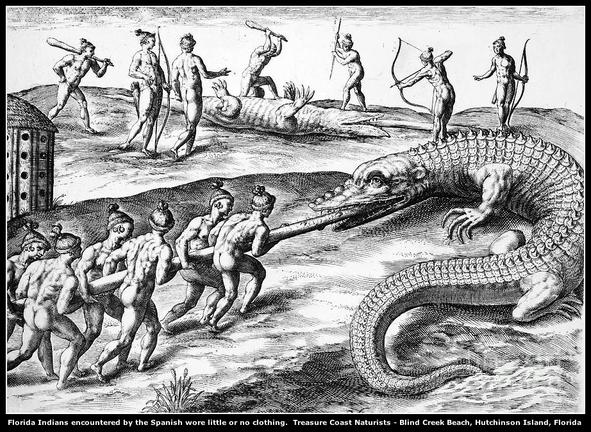 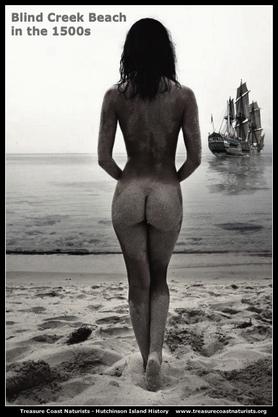 Up until the 1500s (when European explorers began conquering other cultures), and more intensely in the 1700-1800s (when missionaries started traveling to the far corners of the Earth), the commonly-accepted dress codes in much of Africa, South America, North America, Australia, and Pacific Oceania involved little or no clothing.  Even the giant Indians of frigid Patagonia in the southern extreme of South America lived most of their lives nude. The explorer Ferdinand Magellan wrote in his journal this riveting account of his passage through Tierra del Fuego - during what became the first circumnavigation of the world (1519-1522). 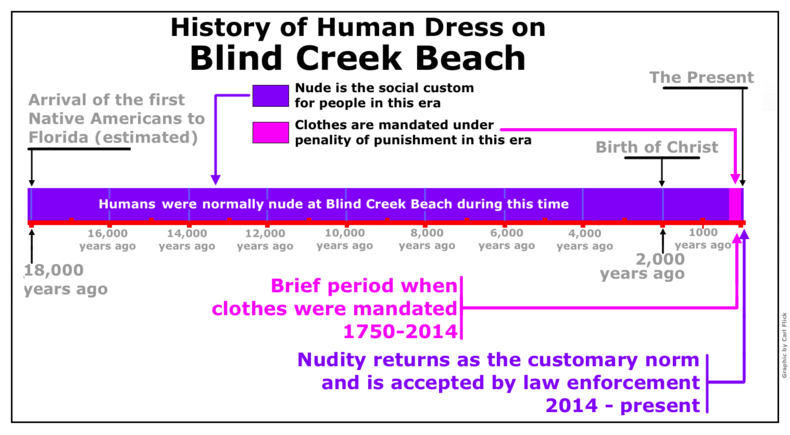 Historic researchers have found evidence of Indian habitation on Hutchinson Island (home to Blind Creek Beach) extending back thousands of years. Hidden in the wilds of mangroves and buttonwood, one can still find "middens" or shell mounds. These are the accumulated discards from centuries of Indian settlements. Long after these tribes were exterminated by Europeans (who introduced deadly smallpox and enslaved entire villages), their mound monuments still attest to their long, exultant history on the Florida peninsula.

Until the modern era and the age of conquest, many non-Western cultures around the world thrived for thousands of years with their own social norms intact. Their traditions of public nudity did not lead to any deterioration of their societies. In fact, they thrived. The subsequent unraveling of many less technologically advanced cultures occurred after encountering Westerners. They forcibly introduced incompatible foreign customs, taught body shame as part of doctrinaire religions, and required cover-up of skin under claims of false modesty. Only after these unfamiliar impositions were prescribed, did serious societal problems (including alcoholism and increased crime) undermine these unspoiled cultures.

As people living in our Pan-Western culture today examine automatically-held social customs, the arbitrary rules regarding modesty (and the suppression of personal freedom) come into question. As naturists we believe that we are matter-of-factly retrieving our historic roots as human beings. Returning to our natural state (even if done for several hours at pristine Blind Creek Beach) is simply part of who we are. The ghosts of Florida's long exterminated Indians might appreciate that we have finally rediscovered their culture's grace on these very same shores.

When some website visitors read this particular page and study the unique Florida naturist history timeline below, they might assume that the message is less than serious.  Not true. This page was created to make an important point. The timeline is meant to encourage people to carefully think about many commonly held customs that have been automatically passed on without question. Learning from the past is the goal.

For the majority of human history, nudity in many forms has been the accepted dress code. Human settlement of North America is now widely believed to extend back at least 40,000 years, when the first people crossed from Siberia to Alaska. New evidence supports the arrival of people in Florida as early as 14,000 - 18,000 years ago. We do know that the robust trading cultures of various Florida Indian tribes existed undisturbed for at least 12,000 years - until the arrival of the Spanish in 1513. When the conquistadors first made contact, their ship logs reveal that their Indian counterparts were naked.​ 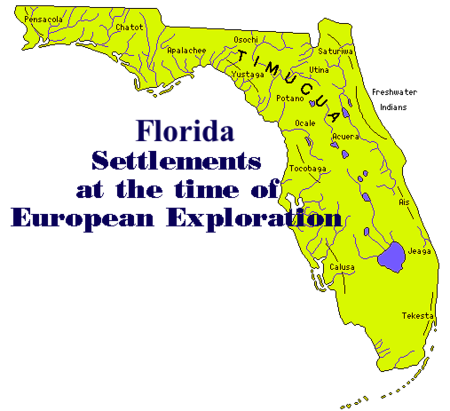