Although the reef is too far out for snorkeling at Blind Creek Beach, you can snorkel at nearby Bathtub Reef Park. It's located near the southern tip of Huchinson Island where the reef almost touches the shore.

​Status: The Beach is OPEN

have been lifted for a soft opening. Bathrooms have been temporarily removed to prevent infection. 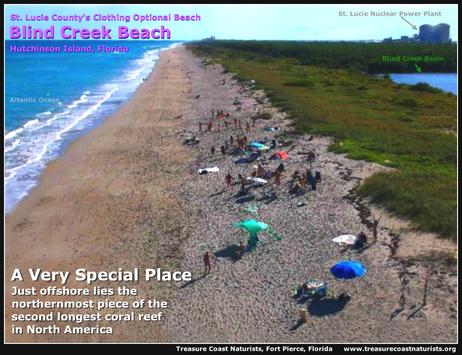 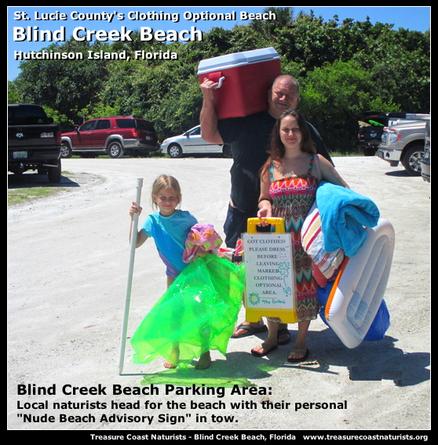 6) The Corporation is to actively promote and encourage clothing-optional recreation and personal growth opportunities for all ages through its educational outreach programs.

7) The Corporation is to establish and maintain a working and amicable partnership between government and/or other citizen groups for responsible management and maintenance of clothing optional public lands within natural habitats.

8) Help promote, protect and maintain the natural environment by assisting government and/or other non-profits in their efforts to make public lands with clothing optional opportunities, safe, harmonious, and welcoming to nature.

The official naturist kick-off at Blind Creek Beach occurred on Sunday, June 8, 2014 involving 30 pioneers. Clothing optional enthusiasts showed up and patrolling law enforcement finally understood the distinction regarding simple nudity (allowed) and lewd behavior coupled with nudity (not allowed). The 30 year cat-and-mouse situation where naturists used the beach under constant threat of arrest - was finally ended. Since that time nude use of Blind Creek Beach has steadily grown, so much so that tourists are arriving from other states and European countries. Just ask the local hotels and nearby restaurants. They've witnessed a dramatic and desirable change for the better. For the TCN list of local naturist-supportive hotels and restaurants, click here. Hotels and restaurants that seek to be added should contact TCN.

4) Increase the awareness of naturism and body acceptance among naturists and non-naturists.

5) Attain an acceptable level of understanding and acceptance by the general public of naturists and their activities throughout St. Lucie County.

Welcome to the
Website of the Treasure Coast Naturists

We are a group of friends working together as part of the reactivated Treasure Coast Naturists. Since 2014, we have established a family-oriented, naturist or clothing-optional beach on Blind Creek Beach. The common name is a nude beach. Our piece of paradise is located on Hutchinson Island, which is situated between Fort Pierce and Jensen Beach on Florida's Treasure Coast. Although casual nude use has a long history at this remote, primitive and pristine beach, it is now recognized by local law enforcement as lawful. You are invited to join us.​ As you read through our website, you may be surprised how organized we've become. We invite you also to visit and "like," our Facebook page. Go to:

​St. Lucie County, which has jurisdiction, is benignly supportive. Indeed a few years ago, the County's Blueways Advisory Committee (which focuses on strategic planning and management of regional bodies of water) recommended establishing a clothing optional beach, albeit at a different location. But the suggestion was not acted upon. In early June 2014, local naturist activists met with the St. Lucie County Chief Deputy Sheriff, the Assistant County Attorney, and a County Commissioner (and chair of the Blueways Committee) to discuss proposals. Additional meetings took place later that month with the rest of the County Commissioners.

Treasure Coast Naturists was one of several local non-profits that helped take part in International Coastal Cleanup Day. This FWC video pays tribute to the participating groups. TCN and Blind Creek Beach are featured in several clips. Just click on the video to view.

The outcome was that the County Commission took no action in 2014, which was precisely what the naturists were requesting. Florida's progressive state laws allow for a naturist beach. Further, government informally conveyed its preference to interact with an organized non-profit partner in regard to Blind Creek Beach. St. Lucie County government uses this blueprint with many other county advocacy organizations. A core naturist group was formed under the introductory name of Friends of Blind Creek Beach. Over the following two years the group matured into the not-for-profit - Treasure Coast Naturists. It's board and volunteers help monitor and suggest improvements to Blind Creek Park, watch-dog its natural environment, and continue to educate local authorities (particularly law enforcement and county staff), about this park's environmental and human needs.

1) Advance and protect the rights and interests of naturists throughout the Treasure Coast region.

2) Support the responsible recreational nude use of public lands.